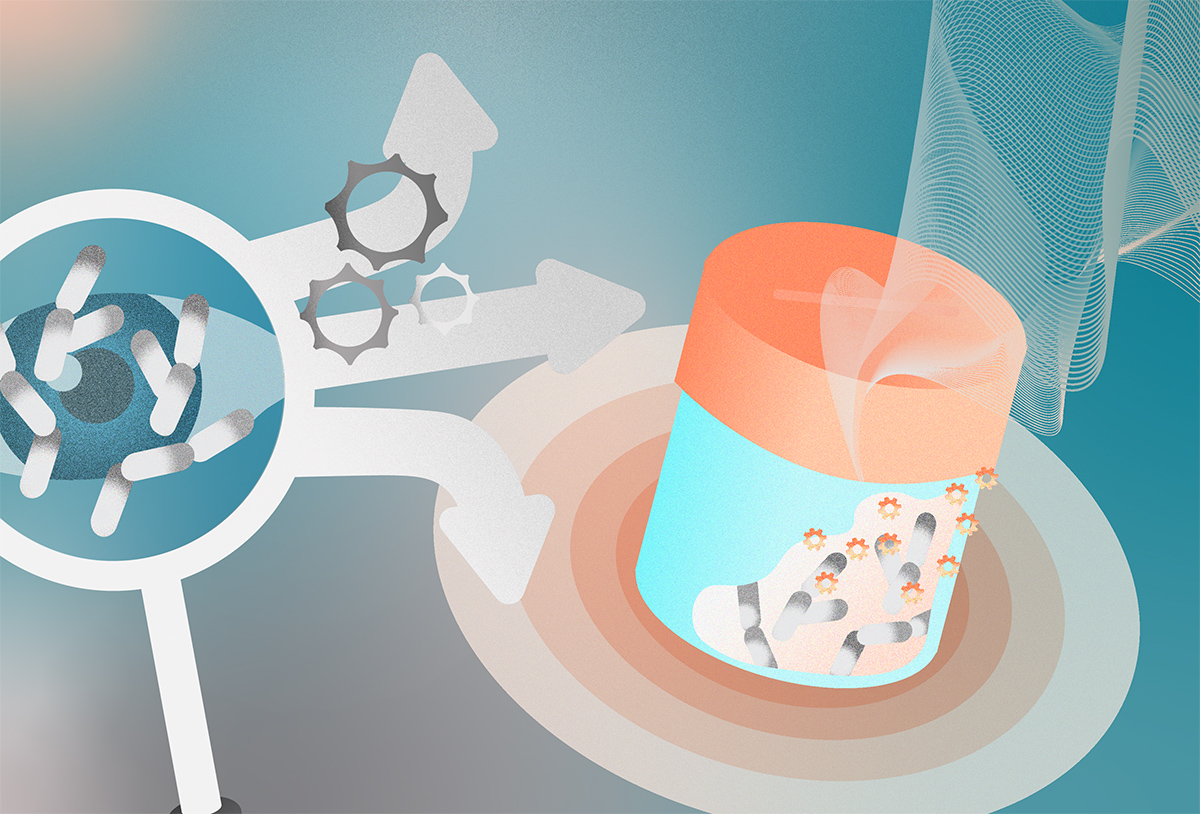 Microcalorimetry: a promising alternative to studying microbes with more to offer than traditional optical density readings

Although Optical Density (OD) measurements have been traditionally applied to examine the growth of bacterial cultures, the technique of isothermal microcalorimetry is becoming widely used for its versatility, sensitivity and ability to monitor metabolic activities in real-time.

Microcalorimetry measures the energy in form of heat produced by metabolic reactions, which can be measured at a rate of less than one microwatt. Different organisms produce different levels of energy during their growth, generating a unique heat signature. One can observe how organisms behave under certain treatments by monitoring the heat flow at specific time-points. Here we introduce a few highlights of microcalorimetry and several applications in biomedical sciences using the calScreener.

Figure show a thermogram in blue which is a measure of metabolism compared to a growth curve in grey. When the bacterial culture is in stationary phase, you can see metabolic changes in your sample.

The versatility of microcalorimetry is exemplified by the flexibility of the calScreener to measure metabolic rate independent of medium, cell-type and cell-model. Whether it is Gram-negative or Gram-positive bacteria, a piece of tumour tissue or dental implant material, the process of using the machine is fuss-free as it does not require a specific preparation of samples beforehand and is not restrictive in the type of medium used. The technique has few limits in morphology aside from the size, and its label-free and nondestructive characteristics make further post-experiment measurements and analyses possible. In addition, microcalorimetry is especially useful when studying microbial communities, as metabolic profiles of mixed culture and individual organisms can be easily identified and compared.

As a result of its ability to measure low levels of heat production, microcalorimetry can detect even the slightest change in metabolic activity. Its sensitivity (around 1000x more sensitive than optical-based assays in the case of the calScreener) in turn leads to improved accuracy of data, an example of this being the highly sensitive measurements of bacterial responses to antibiotic exposure, which ultimately results in faster detection time and more rapid diagnoses. It is also worthwhile to consider microcalorimetry if you are studying slow-growing bacteria, as it is virtually ‘unlimited’ in experiment time and can run for as long as needed, while its sensitive sensors allow for efficient continuous monitoring throughout.

Although the history of calorimetry dates to the 1700s, the potential applications of microcalorimetry are still relatively new and undiscovered. Nonetheless, its novel characteristics inspire innovative possibilities.

As opposed to optical density experiments which can sometimes result in a delay in the data due to false positive signals, this technique facilitates real-time observation of metabolic activities. From 2D cell culture to tissue sample to synthetic 3D culture, experiments involving difficult samples can be easily monitored in the same assay type environment using the calScreener. Furthermore, all of this can normally be accomplished using a low sample volume due to the nature of the technique.

Monitoring growth of anaerobic microbes using OD and generating a growth curve has been challenging for various reasons. The main one being that strict anaerobic conditions must be observed throughout, starting from the sample collection stage which can often be extremely costly and onerous. Microcalorimetry offers a refreshing and cost-effective solution to this dilemma by using closed ampoules that allow for an ‘air-tight’ system, thus making it possible to measure bacterial activity under non-destructive and controlled conditions. Furthermore, the process of removing samples from the culture is no longer necessary, as independently obtained thermograms reflect changes in heat production which can be studied and evaluated in a continuous manner.

In the face of rising global antimicrobial resistance, microcalorimetry has been used for its accuracy and speed in known experiments to monitor metabolic changes of bacteria in response to different classes of antibiotics. Differences in growth can be detected relatively early, thus significantly reducing the time it takes to determine if a given antimicrobial inhibits the growth of the bacteria. In addition, continuous monitoring of metabolic activity in real-time facilitates prolonged observation without the lag in data that often accompanies optical methods. This also makes it possible to study the metabolic effects of antibiotics and biofilm formation, as well as the detection of subpopulations which may appear after a long exposure time.

By detecting low levels of heat from the biofilm, microcalorimetry can determine how metabolism changes over time. Even in the stationary phase, microcalorimetry allows for a clear profile on metabolic activity that cannot be achieved by looking at the growth curve and confocal images alone. Despite the lower metabolic rate and peak activity that is characteristic of the biofilm, the calScreener is capable of providing continuous real-time monitoring of the metabolic rate, independent of whether it was pre-formed or formed during the experiment. No other technique can directly measure the metabolism of a sample.

Microcalorimetry is a technique that will likely become more prevalent in microbiology in the foreseeable future. Not only does it offer a unique technical edge to studying microbes particularly in the stationary phase, but its versatility and sensitivity also allow for widespread application across different systems. Despite the perceived complexity to using microcalorimetry, benchtop devices such as the calScreener have made the technique more accessible to researchers and labs around the world. Once you grasp the concept of microcalorimetry, the actual handling is quite easy to learn and there is ample support in place if you require any technical assistance. In fact, you may find that the abbreviation of some processes renders this technique a highly feasible and overall cost-effective alternative to using OD.

If you are interested in a closer look at your system’s metabolic output, get in touch with one of our application scientists to book a demo and visit our application pages to see detailed examples of how microcalorimetry can work for you.